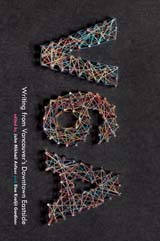 “This is not your standard heavy fare. The Downtown Eastside is full of tragic stories, but somehow V6A strikes the perfect balance of sadness, nostalgia, sincerity, optimism and even humour.” (Spacing Vancouver)

“The collection flaunts a varied roster of 32 contributors who range from emerging to well-known, all of whom share a history with the neighbourhood. The fiction, non-fiction and poetry cover a lot of ground when it comes to subject matter, creating a pastiche reflecting the neighbourhood’s hyper-varied inhabitants.” (Rabble)

“V6A is more than just the postal code of what is often referred to as “the poorest neighbourhood in Canada”. It is filled with writers with all walks of experiences. This collection of poetry, prose, and essays from writers who have a connection to Vancouver’s Downtown Eastside is one of those books you can go back to time and time again to gain new insight into Vancouver’s unique neighbourhood and its ever-changing community.” – ReadLocal BC (recommended beach read August 2018)

I coedited this anthology of writing from the dynamic and pressured Downtown Eastside with John Asfour. It was nominated for a City of Vancouver Book Award and is an important marker in the history of this dynamic neighbourhood as it deals with gentrification and pressures of the modern urban environment. The print book was released in April 2012 and entered its second printing in September 2012. It was shortlisted for the City of Vancouver Book award and has appeared on several course curricula throughout Canada in literature and sociology courses.

For course work, university classes, or more information please contact Arsenal Pulp Press here. To purchase, contact any book store, including Pulp Fiction Books, which can ship it ASAP. We donate sales of the book with partial proceeds going to Thursdays Writing Collective. It is available in the US and internationally as an e-book.

V6A is the postal code prefix for Vancouver’s Downtown Eastside, an area challenged by poverty-related issues and maligned as “the poorest postal code in Canada.” But the Downtown Eastside (DTES) is also beloved by residents for its optimism, community ties and heterogeneity. V6A: Writing from Vancouver’s Downtown Eastside is an anthology of creative writing by 32 people who have been a part of the DTES community in some way, at some point in their lives. Published by Arsenal Pulp Press, this map of a moment in the DTES’ creative life reappropriates the code and allows a community to define itself, on its own terms.

While many participants of Thursdays Writing Collective are published in V6A, the anthology is not a product of the writing program.

Here is a list of some of the press:

The British Columbian Journal published this review by John Belshaw in no. 176, Winter 2012/13.

The website Vancouver is Awesome recommended V6A as a holiday read Monday, December 3, 2012.

Thank you to the hosts of Wax Poetic, Pam Bentley and RC Kowslowski, for having Elee, My Name is Scot and Antonette Rea on their Nov 14, 2012, 2-2:30pm show.

Thanks to University of British Columbia’s Arts Report on CiTR 101.9fm for this interview on Aug 22,2012, 5pm about Thursdays Writing Collective’s participation in the Summer Dreams Festival Aug 25, 2012. The podcast is available here.

The journal BC Studies reviewed V6A here in an excellent, intelligent consideration of the book and what it means to the province. July 2012.

The urban issues website Spacing inaugurates a new feature on its Vancouver site: “Writing Vancouver” with biweekly excerpts from V6A beginning June 15, 2012. The section invites other DTES writers to contribute their writing to the blog. We’re happy to have had a role in establishing another venue for DTES writing! So far pieces by Rachel Rose, Madeleine Thien and Albert Flett have been posted.

An excellent article with excerpts from V6A is on TheTyee.ca from June 15, 2012.

A review of V6A appears here May 7, 2012, on the website of Spacing Vancouver, a site concerned with urban space and mapping.

CBC radio’s Ariel Fournier speaks with host Sheryl Mackay  about Thursdays Writing Collective on North By Northwest, Saturday, April 21st, 7:30am. Ariel wrote with us last week and made this short doc which includes interviews with Muriel, Henry, John and Elee.

On Monday April 16, 2012 contributors Jonina Kirton, Stephen Lytton, Don Larson talked with Gunargie O’Connell on Vancouver Coop Radio’s “When the Spirit Whispers” from 1:20-2:30pm. Gunargie led an interesting and heartfelt discussion about the impact of Residential Schools and abuse on First Nations and Metis people.

Arsenal Pulp Press blogged about the launch at their site Arsenalia.

On Thursday April 12, 2012 contributor Irit Shimrat and coeditor Elee Kraljii Gardiner were guests on CBC’s On the Coast with Stephen Quinn. We will post the audio link here as soon as it is available!

An article on V6A appears in the April 6, 2012 print and online Vancouver Courier.

Megaphone, Vancouver’s street magazine did a cover story on V6A with interviews with Henry Doyle, Michael Turner, Cathleen With and Madeleine Thien. Here is the cover!