My first book of poems, serpentine loop was published by Anvil Press March 2016 and published in second edition in January 2017.

From the League of Canadian Poets Raymond Souster Award Jurors: “Gardiner’s use of figure skating visuals and terms is brilliant. The poems cut across multiple themes, skating across relationships, childhood memories and loss cutting deep, taking elaborate risks, with few soft landings. Beginning and ending on the ice, a poetic figure 8, we travel with her through the inside and outside edges of life. Standouts include “Costume Maker 1960” about complex, abusive relationships and “Aubade”. Here Gardiner loops medical procedures with delicate figures of garden plants and flowers, confessing, “I am isolated, one stalk in a sterile vase.” “The inside of my forearm is written with winter ivy.” Both poems and the entire collection is worthy of Olympic gold.” 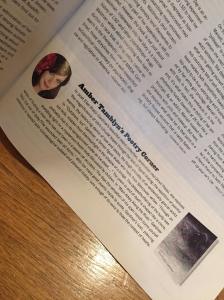 “In poet Elee Kraljii Gardiner’s beautiful debut collection, serpentine loop (Anvil Press), she explores the magnificence of life’s circular tropes through the lens of figure skating; the repetition of painful events, the balancing dance of love and desire, the tough climates of an existentially glacial world. In “Outdoors, Ice” Gardiner, a former figure skater who hails from Vancouver, writes: “Through an ice hole. Hidden from the/moonlight in the shadow of a bridge. The delayed/surfacing of the body was probably due to its being/pinned under an ice sheet….” The poem in and of itself is shaped like a circle, shedding light on a mysterious frozen body discovered by children. In “Main Artery Along the River,” Gardiner writes of finding a man who has just been in a severe car accident: “For days the sensation of his open mouth turns you/off food. Eat out of duty./The wounded take all forms.” With too many great poems inside to quote, Gardiner’s lush, piercing collection is layered with climatological subtext and personal history, sure enough of its voice to thaw the coldest of hearts.”

A Canadian Literature review from March 29, 2017 mentions, “the ice itself becomes a character in the poems, acting both as antagonist (when the poet falls through the ice) and as muse (the precise joy of skating).”

An in-depth and lyrical review of serpentine loop appears here at Debutantes, a new site for reviewing first books, by Kara du Plessis and Aaron Boothby who wrote the review. “…an exploration of the form’s expressions in unexpected ways, both visually and sensually, in emotion and language, to say the shape of a poem deepens, taking on all these levels at once, becomes a singular experience in itself.”

Happy to see serpentine loop mentioned twice as a Best Book of 2016 by Doretta Lau and Michael Prior!

serpentine loop is on oratorealis’ Publishers Favourites of 2016 Poetry list!

“Skating is an analogue for writing in Elee Kraljii Gardiner’s serpentine loop and further extends as a device to shape this stirring and precise debut…[Her] sparkling and sensitive kinematic style is everywhere evident…”- serpentine loop reviewed in Herizons, fall 2016

“The poems are distinctive for their brave use of metaphor, often situated in medical contexts, that muscles beyond conceit and into other-worldliness…readers may think of Coleridge’s albatross, the poem eerie yet somehow weighted concretely.” – serpentine loop reviewed in Poetry is Dead, issue 14, 2016:

“Kraljii Gardiner’s remarkably unique and well-conceived first collection takes up residence in you. serpentine loop’s treatment of ice – whether it’s lunge above or plunge below – is an indelible read.”  – Betsy Warland, Oscar of Between (Caitlin Press, 2016), Breathing the Page (Cormorant Books, 2010)

Only the most steady of poets will hone a central motif throughout the whole of a collection. To maintain such a motif is to be beholden to it. And what does it mean to be beholden to figure skating? It means precision and dexterity, and to inspire curious astonishment. Kraljii Gardiner gracefully succeeds in this poetic undertaking. serpentine loop is precise and dexterous in its language and affect. This book awes me.  – Amber Dawn, author of Where the Words and My Body Begins (Arsenal Pulp Press, 2015), How Poetry Saved My Life: A Hustler’s Memoir (Arsenal Pulp Press, 2013)

“If you close your eyes, you can almost smell the ice and hear the sound of a loop being patiently carved.” The first review of serpentine loop (“a must-read”) is up at Skate Guard! June 28, 2016.

serpentine loop by Elee Kraljii Gardiner (Anvil Press) is precisely laid out in an easy to navigate motif of figure skating. It’s a powerful work that invites readers into the rainy climate of expensive Vancouver, capturing the loneliness we call solitude with truths like, “hear us tapping on the stucco.” In its empathy and compassion, the collection elevates readers to touch and grasp their own “defiant act of communion,” to weave magic until the desire for recip- rocal, meaningful connection transcends isolation. Insightful and concise all at once. —Cynthia Sharp