Bust magazine is one of the few general interest magazines to include poetry in its book reviews section. In fact, they have a Poetry Corner and it is written by three-book author, director, and actor Amber Tamblyn. The April/May issue includes her review of serpentine loop.

How exciting is this review? Very. Not only because it puts serpentine loop in conversation with the slate of interesting books in the issue but because it leaps over the 49th parallel, that invisible yet dense divide between US and Canadian readers. As a writer rooted with one foot on each side of the border, this feels great. And being a long-time Bust fan myself I am thrilled. This sort of support in the form of a considered, attentive review is a real gift. Here it is: 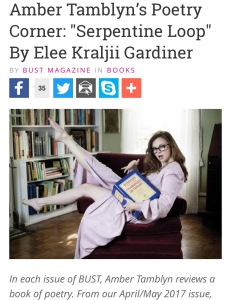 In poet Elee Kraljii Gardiner’s beautiful debut collection, serpentine loop (Anvil Press), she explores the magnificence of life’s circular tropes through the lens of figure skating; the repetition of painful events, the balancing dance of love and desire, the tough climates of an existentially glacial world. In “Outdoors, Ice” Gardiner, a former figure skater who hails from Vancouver, writes: “Through an ice hole. Hidden from the/moonlight in the shadow of a bridge. The delayed/surfacing of the body was probably due to its being/pinned under an ice sheet….” The poem in and of itself is shaped like a circle, shedding light on a mysterious frozen body discovered by children. In “Main Artery Along the River,” Gardiner writes of finding a man who has just been in a severe car accident: “For days the sensation of his open mouth turns you/off food. Eat out of duty./The wounded take all forms.” With too many great poems inside to quote, Gardiner’s lush, piercing collection is layered with climatological subtext and personal history, sure enough of its voice to thaw the coldest of hearts.