UPDATE: EXCITING NEWS: We are thrilled to announce the addition of performances by two ice dance pairs coached by Olympians Aaron Lowe and Megan Wing! Haley Sales and Nikolas Wamsteeker are 2017 National Team members,International competitors for Canada, 2017 challenge bronze medalists and 2017 BC provincial champions. Diana Barkley and Geoff Squires are the Adult World Dance Champions. This is a rare chance to be on ice with top level performers, hear their edges and see how fast they skate.

Come be a part of a collaborative, perfomative and participatory skating event based on the book of poems about ice, serpentine loop. 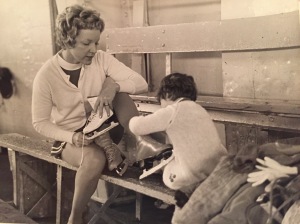 This event takes place on the unceded lands of the xwməθkwəy̓əm (Musqueam), Skwxwú7mesh (Squamish), Stó:lō and Səl̓ílwətaʔ/Selilwitulh (Tsleil-Waututh) Nations. 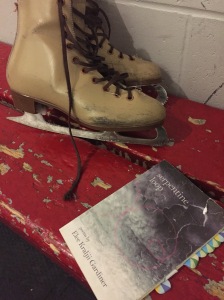 Free event, open to public. Spectators and non-skaters welcome. Rental skates available or bring your own! Bring your kids, friends, neighbours and anyone else who wants to skate for fun.

We know it’s late-ish but the ice was cheap! Before we get on the ice at 10pm we’re featuring a ten minute reading and a short off ice talk by professional skaters Elin Schran and Douglas Webster. After that Douglas and Elin are going to demonstrate some figures and edges and then  Elin is going to skate the Canadian debut of the program she choreographed of the book!

Is this crazy? Perhaps. But figure skating and writing share elements of language. On-ice moves include “paragraphs” and “brackets,” for example, and both work with an idea of inscribing the blank sheet. serpentine loop uses the vocabulary of skating to push off from the frozen river and rink and discuss issues of gender, social justice and how we treat each other. The book, in its second printing and named twice to The Walrus’ Best of 2016 list, arises from the my experience growing up around ice as the daughter of US Olympic figure skating gold medalist Tenley Albright. I actually sequenced the poems at the Skating Club of Boston by laying the pages out by the barrier. Now the poems are leaping off the page onto the ice. 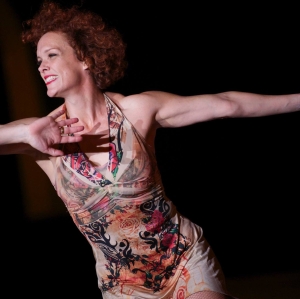 Professional figure skater Elin Schran, my sister, will perform the Canadian debut of the short performance she choreographed based on serpentine loop. Elin Schran is the co-founder of Boston-based Frozen Frog Productions and is the innovator of IceFlow (a yoga-inspired skating class). She is a choreographer and performer with experience in many shows including Ice Capades, and taught for five years at Dorothy Hamill’s Fantasy Skating Camp.

Elin is joined by US skater and professional choreographer Douglas Webster, who will speak about the shared vocabulary of skating and writing before taking the ice to demonstrate school figures and a variety of edges in tandem with Elin Schran.

Professional skater and choreographer Douglas Webster co-founded the internationally-recognized Ice Dance International in 2014 to create classical and contemporary ice ballet with a professional company. Currently, Douglas is the Creative Director for Shall We Dance on Ice, an ABC TV special that features ice dancing and ballroom. He has worked with Disney on Ice, Holiday on Ice, Stars On Ice, The Sun Valley Ice Show and served as the Artistic Director of Ice Theatre of New York (ITNY) as well as their Associate Artistic Director, Resident Choreographer and Ensemble Director. He is on the staff of Grassroots to Champions and on the boards of the Young Artists Showcase and The Dance Hall in his hometown of Kittery, Maine.

Previous iterations of the event have been held in New Hampshire and Massachusetts but this is our first Canadian event.

9:45pm-11:00pm: everyone (all levels and abilities) welcome to skate, rentals available

10:00pm: we ask people to move to edge of ice to watch Elin Schran and Doug Webster perform short demo of school figures and edges 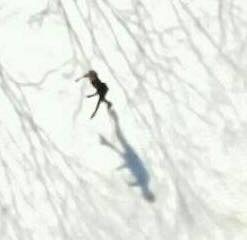 Venue is accessible to City of Vancouver standards and equipped with elevators. For details please contact Hillcrest Community Centre, 604-257-8680

We hope to see you!