Each year Vancouver Moving Theatre launches the impressive and vibrant Heart of the City Festival at Carnegie Community Centre. Today was the beginning of the 12 day, 100-event, 40-venue arts and community festival. The afternoon centred on the unveiling of Richard Tetrault’s vibrant mural. DTES bard Bud Osborn, poet Sandy Cameron, poetry supporter and artist Diane Wood appear in the bottom left. You can see other familiar faces, too. It’s a massive triptych – so beautiful. 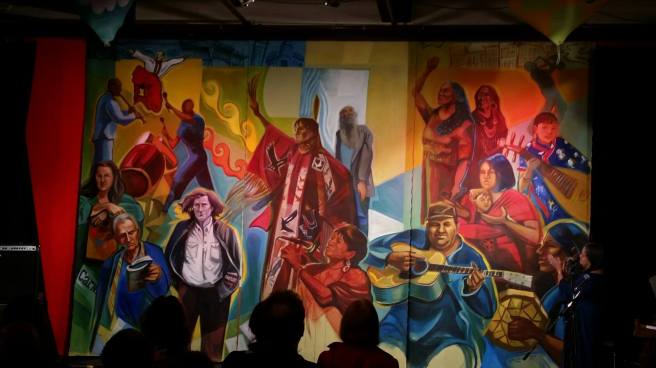 The welcome and acknowledgment of territory by Carnegie’s first ever First Nations Elder in Residence, Les Nelson, was fantastic. He sang a song with his drum and pointed out his shirt was still covered in eagle down from his appointment ceremony last week. I’d never seen eagle down before.

Heart of the City Festival Director Terry Hunter presented several people with plaques – just the kind of generous and inclusive act for which Terry and his wife Savannah Walling are known.

riter. Gilles presented me with a collaged folder he made on a retreat with clippings all related to writing.

Bonus: he used a first draft of one of his poems, too! Inside the folder are precious letters of thanks from several writers from the group – it will take me a long time to digest their words. The experience was extremely moving.

Throughout it all new TWC director Amber Dawn was snapping photos and clapping and being a wonderful lighthouse to the writers in their new season of writing.

I needed a picture with Carnegie director Ethel Whitty who will be leaving that position in January 2017. Ethel was responsible for bringing me, and what turned into Thursdays Writing Collective, to Carnegie back in February 2008. She and SFU’s Writer’s Studio worked together to support me and ElJean Dodge in teaching a four week course in memoir. I have huge gratitude to share for Ethel, Rika Uto and the excellent staff at Carnegie.

Two of the people who first joined us for that month of writing were there today – Tom Quirk in official capacity as a photographer and Leith Harris watched as her son presented an award. Other longtime writers were in the room, too, underlining the immense number of connections we share: Phoenix Winter, President of the Carnegie Association, Robyn Livingstone, Patrick Foley.

Tomorrow, after an interview at CBC’s North By Northwest radio show I will run to Carnegie to catch the last part of class. From there we head to Gallery Gachet for our 7pm Heart of the City gig with Jordan Abel. Come join us!

Jordan Abel + Thursdays Writing Collective at the Heart of the City Festival!

Where do the mind’s eye and poetic heart meet? To celebrate our 9th season, Thursdays Writing Collective will explore the overlap between words and images and we invite you to join us. Guest Jordan Abel, a Nisga’a experimental writer from BC, will read from his highly visual and critically compelling work, followed by writing prompts and open mic.

**Bring your pens and notebooks for this event of live reading and writing.**

Jordan Abel is a Nisga’a writer residing in Vancouver. He is currently completing his PhD at Simon Fraser University where he is focusing on digital humanities and Indigenous poetics. Abel’s conceptual writing engages with the representation of Indigenous peoples in Anthropology and popular culture. His chapbooks have been published by JackPine Press and Above/Ground Press, and his work has appeared in numerous magazines and journals across Canada, including Prairie Fire, The Capilano Review, and Canadian Literature. He is an editor for Poetry Is Dead magazine and the former editor for PRISM international and Geist. Abel’s creative work has recently been anthologized in Best Canadian Poetry (Tightrope), The Land We Are: Artists and Writers Unsettle the Politics of Reconciliation (Arbiter Ring), and The New Concrete: Visual Poetry in the 21st Century (Hayword). Abel is the author of The Place of Scraps (winner of the Dorothy Livesay Poetry Prize and finalist for the Gerald Lampert Memorial Award) and Un/inhabited. Abel’s third book, Injun, was released from Talonbooks in spring 2016.